My Debt to David Pawson 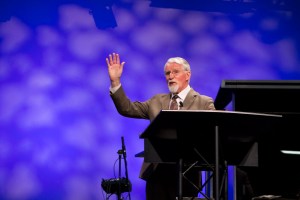 After the great Wall Street Crash of 1929, the world entered one of the worst economic depressions it has seen. It effected not only the US, but spread across the Atlantic to the shores of Great Britain. One of the young men that lived through the dark days of this depression was a soft-spoken Northumbrian in the North of England who would later run a very successful hill farm with sheep and cattle. In the midst of the economic depression a University Professor from the local town of Newcastle also saw a greater spiritual depression that needed solving in the midst of the young men and as a result started a young men’s discipleship group named The Dilston Road Young Men’s Group. The young Northumbrian lad called Tom Hall, became a disciple of Jesus through this group and also largely as a result of the University Professor, a certain H. Cecil Pawson the young lad became a Methodist local preacher. Thomas Hall was my Grandfather and “the Prof” was the father of David Pawson.

David Pawson is now an 81 year Bible teacher nearing the end of his course and he recently came to Kansas City and taught 24 60-90 minute messages over the course of a week (quite a feat for someone in their 30s, let alone someone in their 82nd year) I have the greatest respect for this saint of God and since he left I have felt compelled to write a small piece outlining my debt to him.

Not only did David’s father have a great impact on my Grandfather’s life, but he also became somewhat of a mentor to my own father. Giving input regarding entering the Methodist ministry, first as a lay preacher and then eventually to literally “sell the farm” and enter into full time Christian work. Although my eldest brother Wesley was born on the farm, it was not a life that I was destined for and from my earliest days I can only remember Dad being in ministry. Sometime early in his ministry Dad was chatting with the Prof about good Bible teachers in England. When talking about some of the finest teachers the Prof made a comment that shocked my Father – The Prof thought that although the men they were talking about were all fine teachers, he could think of no finer teacher than his own son David. My father had known David on and off growing up however it was not long after this that Dad started to listen regularly to the recorded talks of David coming from his church Millmead in the town of Guildford.

After the Prof died it was to David that my Father would travel for advice and biblical insight, for a brief period travelling together as part of Youth for Christ and helping launch a well-known camp in the UK called Spring Harvest. It was also in the early 80s when David suggested to my Father that a new church fellowship be planted in our hometown of Hexham. I believe around 60 people gathered in our crowded front room on that Saturday, and I remember spending some formative years as part of that fellowship. Hexham Community Church still exists http://www.hexhamcc.com.

It was only in my later teens and early twenties that the link with David began again. My parents (who had moved to several places around the UK) moved back to the North East of England and in particular to the West End of Newcastle, only a few houses away from David’s childhood home. I began to listen to David’s teaching., really for the first time as an “adult” I had since an early age known that the Lord has no grandchildren, only children. I needed to grow up and David’s teaching amongst others was most helpful in this “growing up” process. I remember a few times when he came to visit for a cup of tea being slightly in awe. Nevertheless, I was growing in my faith and for this I thank David.

It is only in recent years that I have begun to recognize a calling on my own life to teach that my respect for this teacher has again been heightened. A few years ago he came to teach in Kansas City and stayed with Shari and I for the visit. At the close of the visit he prayed with us a couple and gave us some sound advice. He said that he had noticed all the things I was doing and noted was too busy. He told me all the things I was doing were not of the Lord because the Lord was not a hard taskmaster. He therefore told me to write down all the responsibilities I had and to ask the Lord about each of them. I had to determine if I was doing something out of faith in the Lord or not – if the Lord had not led me and it wasn’t of faith it was sin… gulp.

I knew he was right. He had however highlighted something that was confirmed again and again by all the voices of spiritual authority in my life. The Lord had called me to teach. This is a frightening prospect in one respect as I recognize that the Lord holds teachers to a higher degree of judgment (James 3:1). However the other side of the coin is worse, if he calls me to teach and I disobey I am in a far worse situation.

This leads me to my final debt of gratitude to David.As I have begun to give myself to teaching more and feeling the pain of how this effects the rest of my life I have looked across the Body of Christ in the western world, in the UK and US and seen a Biblical illiteracy that alarms me. Many of the leaders in the Body of Christ are making claims that are simply not rooted in the Scriptures, this saddens me as I look around at the young men (and I highlight men particularly as I see far more spiritually mature women than men) and realize the teaching is not making true disciples of Jesus I am sad and see the urgent need for a remedy of lives that are given as true disciples.The reason I mention this is because there is one group that as I look across the Body that are truly genuine about their commitment to the scriptures and they would be the new Calvinists. People who I highly respect such as John Piper, Mark Driscoll, Tim Keller, C.J. Mahaney and my favorite Bible School teacher Sam Storms. I love these men for their commitment to the things of God found in the scriptures and truly making disciples of Jesus, however the thing that I cannot accept as Biblical is the infection of Beza’s Calvinism and the five points of Calvinism outlined in the acronym TULIP. I do not wish to come down on ANY side in the Calvinist-Arminian debate, however I do want to be true to scripture and as I read the scriptures I simply cannot find those five points in scripture. The reason that I mention David is because of all the theologians that I most respect David would be in the small minority who falls on the so-called “Arminian” side. He is by no means an Open Theist as many in the Reformed camp are so easy to call any who are not Reformed in their theology. But he is dedicated to preaching the scripture and not a human construct and for this I am grateful.

Disciple of Jesus, Husband and Father, Intercessory Missionary, Senior Leader at International House of Prayer and Teacher at IHOPU
View all posts by Jono Hall →
This entry was posted in Bible Stuff, Personal Updates and tagged David Pawson, Family. Bookmark the permalink.

2 Responses to My Debt to David Pawson