Thoughts on The Response

This last Saturday I travelled down to help webstream a prayer meeting from Houston. It was no ordinary prayer meeting. Firstly it was in Reliant Stadium with 44,000 other predominantly Texans and secondly it was called by the Governor of Texas – Rick Perry. I have a number of thoughts about the event that I wanted to share. 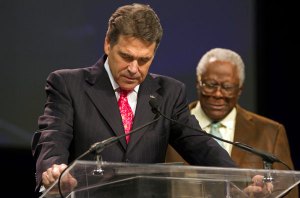 of months back, realizing it was rather unusual (at least in recent history) for a politician to call a day of prayer and fasting. However the ante on this event was certainly upped by the news media when it was revealed that Gov Perry had aspirations of becoming the GOP candidate for the President of the USA. Many thought he would use this platform to reveal or hint at his intentions. I was not among those who believed this, to have done so at a prayer meeting would have been completely inappropriate. I was actually very impressed with what I saw and heard about this Governor. Taking the stage he immediately dispelled the idea that this would be the platform to announce his candidacy by focusing on God “His agenda is not a political agenda. His agenda is a salvation agenda… he followed this with “He is a wise, wise God. And He is wise enough to not be affiliated with any political party.” I have to say I am uncomfortable being in a country where being a Christian is synonymous with being Republican (I really wish polemical issues such as Abortion and Sexual Morality were individual decisions and not based on party politics), but I have to say that I think these comments were very appropriate and classy.

The Prayer meeting itself was both familiar and unfamiliar, lots of IHOP Worship Bands, but a wide array of preachers who prayed from the Word and Faith/Pentecostal Kenneth Copeland and John Hagee to the more evangelical James Dobson and Vonette Bright to the Charismatics such Cindy Jacobs and Lou Engle (not all of these took the platform). It actually felt good that different shades of theological views were putting this aside to pray for the nation. I think everyone felt the presence of God in someway and people actually prayed rather than preached, for this I was glad. Many said it was one of the most powerful meetings they had been a part of.

The Press and Protestors

With over 300 press passes given out, there was going to be risk that this would become a media zoo. It did not. In fact the coverage that the majority of the press gave the event was remarkably favorable. As favorable as could be expected from people who do not believe in God or the power of prayer (this is obviously a blanket statement that undoubtedly does not apply to many of the journalists present). The other element which could have disrupted the day was the protestors; one facebook page said that we could expect close to 1500 protestors. I think perhaps we got a tenth of that number, (I was actually just a little disappointed J) The protestors even included the infamous Westboro Baptist Church. I’m not quite sure why they were protesting as by the time I got to their website they had taken down their rationale. But with these protestors and the commensurate security and police it certainly made it an interesting day.

As for my own part – we streamed the event and it went off fairly uneventfully. For nearly the entire day we had over 20,000 concurrent connected IPs, which is pretty remarkable for as long an event. The online audience with remote sites must have surely reached into the 100s of thousands, we should have clearer analytics this week. But the reports we are getting back from those who streamed are overwhelmingly positive. Praise God.

Disciple of Jesus, Husband and Father, Intercessory Missionary, Senior Leader at International House of Prayer and Teacher at IHOPU
View all posts by Jono Hall →
This entry was posted in In the News, Personal Updates and tagged IHOP-KC, Politics, Prayer, Rick Perry, The Response. Bookmark the permalink.

4 Responses to Thoughts on The Response