The most important injustice to set right? 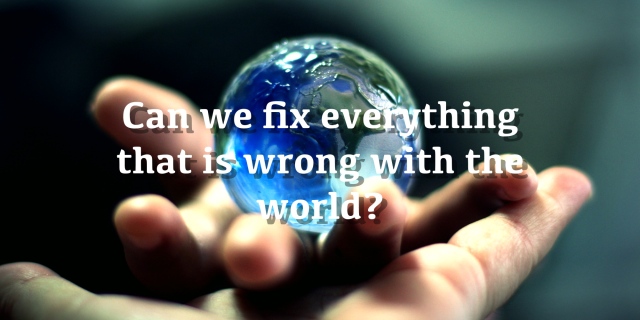 We live in a busy world with increasing demands on our time and our resources. The phrase work-life balance is fairly new to this generation, but so many of us feel the stretch as we seek to answer the demands of the workplace, the demands of our family and marriages, of our friends and our communities, the demands to provide and the demands to relate. It can get overwhelming and so many people seek to find respite in entertainment and in social media. Yet this year has not been a good year to relax in social media (I’m not sure if there has ever been a good year), but it seems this year has been particularly angst-ridden. In the summer, everybody was sounding off about Brexit and in the fall, it was all about Clinton-Trump. THE END OF THE WORLD HAS BEEN NIGH FOR SOME TIME! Or so it would seem -2016 was, after all, an ALL CAPS type of year.

What is particularly disheartening and the reason for this blog is the public shaming and social media shouting that goes on over social justice issues that each side thinks are important. Each tribe picks its list and then gets all self-righteous if the other people (and especially people from the other side of the political spectrum) do not consider their list of social ills the ones that need to be prioritized.

What do I mean by social ills? We live in a world where there are a lot of things wrong.

I could go on, but even with this initial 17 can you prioritize them from most important to least important? Once you have done this, can you place all of these needs into the context of the busy world that we mentioned at the outset. Now answer the question what can individuals do about this whole list? I think everything on this list is noble and needs to be pursued, the thing is I think someone is lying if they say they are actively doing something about everyone of the items on the list and therefore I don’t think it is a good idea to shame other individuals if you see them not doing one of them.

There is, however, one specific way to get involved in all of these and that is through prayer. Prayer changes things. When heaven gets involved things often shift quicker than twenty years of hard slog.

Disciple of Jesus, Husband and Father, Intercessory Missionary, Senior Leader at International House of Prayer and Teacher at IHOPU
View all posts by Jono Hall →
This entry was posted in Bible Stuff, In the News and tagged Change the World, Social Media, Trump. Bookmark the permalink.