Article for this Month’s Partner Journal

It was a grey October day when I first entered the Studios of GOD TV in the north of England. It was my first day working for the GOD Channel and unknown to me at the time their first day broadcasting for a continuous 24 hours. Seven years (to the very day) later I sat in IHOP’s hurriedly prepared studio, marveling at the ‘God Coincidence” as I watched the first live satellite uplink between the International House and Prayer and GOD TV with Mike welcoming Rory and Wendy Alec to American shores. October 1st 2006 was GOD TV’s 11th birthday and also their first day broadcasting on DirecTV’s Channel 365.

GOD TV is a media ministry founded by Rory and Wendy Alec, two ‘media missionaries’ from South Africa who had a burden to see Christian TV come to the dark continent – Europe. Against all odds they pursued the vision God had set before them and in October 1995 in the wee hours of the morning they started a 3 hour broadcast in a country where only 4 years previous Christian broadcasting had been illegal.Now 11 years later GOD TV has offices all around the globe and several 24/7 broadcast feeds which transmit from the base of Mt. Zion in Jerusalem to the uttermost parts of the earth reaching a potential audience of 450 million viewers. 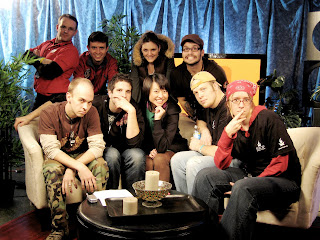 Before becoming the Media Director at IHOP in 2003, I spent four interesting years working for GOD TV – at first I was reluctant to work for Christian TV – I was heading for a career as a city lawyer – however after co-ordinating their distribution and traveling widely in Europe and Africa, I came to see the powerful tool that Christian TV actually is, not only changing mindsets, but actually changing lives.

Most of you will realize by now that something is happening between IHOP and GOD TV. Something that has caught us a little by surprise by the its suddenness and also its magnitude, both ministries are feeling the weight of this new relationship and the impact that it can have for the Kingdom of God upon the Earth.

You may have seen the initial broadcast with Mike welcoming GOD TV to America, or you may have seen the last three conferences broadcast live on GOD TV. It has been massive technical challenge for the IHOP Media Team to be ready for these live broadcasts. The build up to onething was particularly nail biting as we engineered and built a new HD broadcast rig. Our first live broadcast was at 7pm on the first night of the conference and I was doubtful at 6.30pm whether we would even have a workable system, but our engineering team led by Junia Beveridge, ably pulled the rabbit out of the hat. Everyone pulled together and our usual media crew of six people swelled to around forty.Not everything is in place yet and we are literally training on the job, but the next season will certainly be an interesting one for television media at IHOP.

So what can you expect to see coming from this relationship in the next few months.

Conferences will continue to be covered by GOD TV, as well as certain Friday night Encounter God services with Mike’s teaching and worship. We have already started to broadcast a half hour weekly program on GOD TV called Passion for Jesus with Mike Bickle which features worship and teaching from Mike. At the end of April GOD TV aims to start an hourly morning devotional program, four days a week will be broadcast from the Prayer Room in Kansas City. However the big projects are penciled in to commence in October this year.

GOD TV have a passion to see the lost reached through their TV broadcasts, however they realize that the majority of viewers are already believers, as such much programming is aimed at equipping and envisioning the body of Christ through sound biblical training to go out and disciple the nations. With this in mind, IHOP and GOD TV are teaming up to launch GOD School. Taking the training of the Forerunner School of Ministry and broadcasting classes for two hours each day – FSM has seen an increase in students in recent years, however, this new endeavor will see teaching from Kansas City reaching bible schools in Africa, hotels in India and homes in China. We have a vision to see the messages of intimacy with Jesus, the urgency of the hour that we are living in and the way to live a Spirit filled, Sermon on the Mount lifestyle reach every nation of the earth. Already we are filming Mike’s new class on Song of Solomon, Introduction to End Times, Allen Hood’s Excellencies of Christ and will soon record Jack Deere’s class on The Book of Acts. All students who follow this programming will be supported through online training with further study available and interaction with instructors in Kansas City. Truly this will be fuel for the Forerunner lifestyle.

The primary mandate of the International House of Prayerand the heart of everything that we do is the prayer room – ministering before and joining with the heart of God in Intercession and Worship. There is a clear mandate to gather a perpetual solemn assembly in Kansas City, and yet there is a call for solemn assemblies to gather all around the earth so that in one accord the Spirit and Bride can cry out to their Lord “Come” (Rev 22:17). Many of you will already subscribe to the Prayer Room webstream – during the next few months you will notice changes to this webstream, we are increasing the production quality in order to bring it up to a television broadcast quality. The prayer room is at the heart of what we do at IHOP and also the heart of the relationship with GOD TV.

There are presently seven global feeds that broadcast from GOD TV’s Jerusalem Broadcast HQ to the nations of the earth. The partnership with GOD TV will see the night watch hours of 12am thru 6am filled with the Prayer Room. As the world turns so will the broadcast, so at all times the prayer room will be crying out to God with a new region of the earth. This will be a great opportunity to focus our prayers during these periods on the different regions of the earth where the feed is being broadcast. It also means that the webstream that you receive in your home will be a significantly better quality – not simply the static camera it has been up to this point! As we will be increasing the quality of the webstream we want to see the distribution of this increase as well, so if you have a business or a church or a friend that you think could benefit from this 24/7 connection to IHOP sign them up at the website. This 24/7 connection between Kansas City and the GOD TV Broadcast HQ in Jerusalem also has some profound implications. GOD TV operates a ‘Thus says the Lord” Program Schedule, which means that should dramatic events occur on the earth such as natural disasters, terrorist attacks etc, it will be possible to switch the programming of GOD TV so that IHOP will be leading Global Concerts of Prayer night and day, through this technology it will be possible to lead millions of believers in global prayer.

Lastly (but by no means least), the International House of Prayerhas become an organizational division of GOD TV – the Prayer Division! With Mike Bickle as the Divisional Head. IHOP has many friends and a few ministries with which we have a special bond whom we uphold in prayer with special intensity. GOD TV is now one of these ministries and we are committed to seeing 1 million intercessors raised up to support GOD TV through prayer. We are already praying for many prayer requests of viewers that are coming from all parts of the globe, however the ministry itself is leading many away from darkness and deception and into light and truth and as such is high on the enemy’s list of targets and therefore GOD TV desperately needs our prayer covering. If you are interested in committing even 1 hour a week to pray for GOD TV please contact prayer4godtv@ihop.org.

With such massive challenges and projects ahead, we are more grateful than ever for your generous support for IHOP and all of the many projects that are moving forward. We are starting a Media Apprenticeship in light of the many growing projects. Broadcasting is not inexpensive in terms of equipment, personnel and transmission and so we are trusting the Lord to release $10 million in 2007 for this very project.

If you are interested to learn more about our partnership with GOD TV it is possible to watch an interview between Mike Bickle and Rory and Wendy Alec at www.IHOP.org.GOD TV can be viewed on DirecTV #365 or at www.god.tv

Disciple of Jesus, Husband and Father, Intercessory Missionary, Senior Leader at International House of Prayer and Teacher at IHOPU
View all posts by Jono Hall →
This entry was posted in Media Stuff, Personal Updates and tagged GOD TV, IHOP-KC. Bookmark the permalink.